Timing was on my side by arriving in Ecuador on Easter. I got a chance to eat Fanesca which is served only once a year on Good Friday. It’s a rich squash based soup with twelve kinds of beans served with a multitude of toppings.

However, what I found most special about this meal is not so much that it’s only served and consumed annually, but how it was prepared by four different households. Yes, that’s right, it took four families to cook it!

The families are all related through the four sisters whose houses are staggered slightly above each other on a plot of land in the hilly area of Ibarra. Prep work was done between the two houses near the top of the hill with ingredients being carried between each other to be cooked.

One kitchen was full of people chopping up squash and separating beans, while the dining room table had kids helping out the adults chop some colourful vegetables while separating more beans and rice. When I entered the kitchen in the other house, I was met with the aroma of food being boiled and fried on the small gas stove. While savouring the scent and gazing out into the mountainous backdrop, Julio and I were handed a knife, chopping board, plantains and was motioned to chop them into slices. Hooray, I contributed!

Meanwhile, out on the laneway was a makeshift fire pit of bricks, grills and some rebar where two pots were heating up with the firewood I helped gather earlier in the morning. Ingredients were added to the gigantic pot which slowly reduced to the soup while the smaller pot was slowly boiling milk, rice and cinnamon for dessert. Kids, adults and even the dogs would pass by under the tarp every so often being drawn in by the amazing smell of the soup as it came together.

Once everything was ready, extra tables and chairs were brought in from all the other houses to setup the dining room – one table for the adults and one for the kids where I was seated. After all families were gathered around, a blessing in Spanish and the Lord’s prayer were recited before enjoying the delicious meal where everyone was lost in conversation and laughter that I could not understand, only picking out a few words I’m familiar with.

At one point, it was explained to me that the mixing of twelve beans had a religious significance, possibly with the twelve apostles of Jesus. However, the whole process took on a different meaning to me. The laborious cooking of Fanesca, represented the togetherness and bond between the families through their efforts to make a great holiday meal.

Just the typical surroundings in Ibarra. 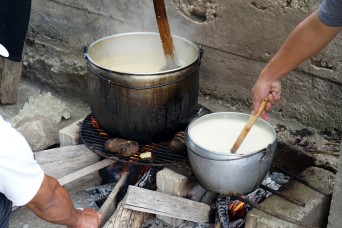 Stiring the pots, adjusting the flames.

Adding the beans. Yes, it was very beany if you know what I mean. 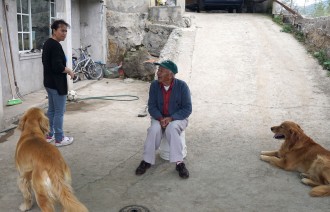 The Fanesca was served with fried plantains, fried dough balls, a slice of avocado, cheese, a hard boiled egg and some salted fish boiled in milk as toppings, finished off with Arroz de Leche for dessert.
0.344946 -78.142720
Ejido de Ibarra, Ibarra, Ecuador